In the autumn of 2002, three archaeological trenches were cut along the sides of the
principal holloway which descends the steep south-facing slope immediately below the
crest of Beacon Hill. These were dug by hand, in conjunction with a project to clear debris
from the bottom of the holloway to improve access, and were subsequently backfilled.
Their purpose and location was prompted by the archaeological earthwork survey,
completed earlier in the year (Corney, et al, 2002), which suggested that the remains of an
earthwork agger representing the original line of the Roman Fosse Way were cut through
by the holloway identified as no. 3 on that survey (Fig. 16). Two linked trenches, totalling
32m (1 and 2), were cut to depths varying between 0.3m and 1.0m along the lower
southern edge of the holloway. A third trench (3) 5m long was cut along part of the north
side. 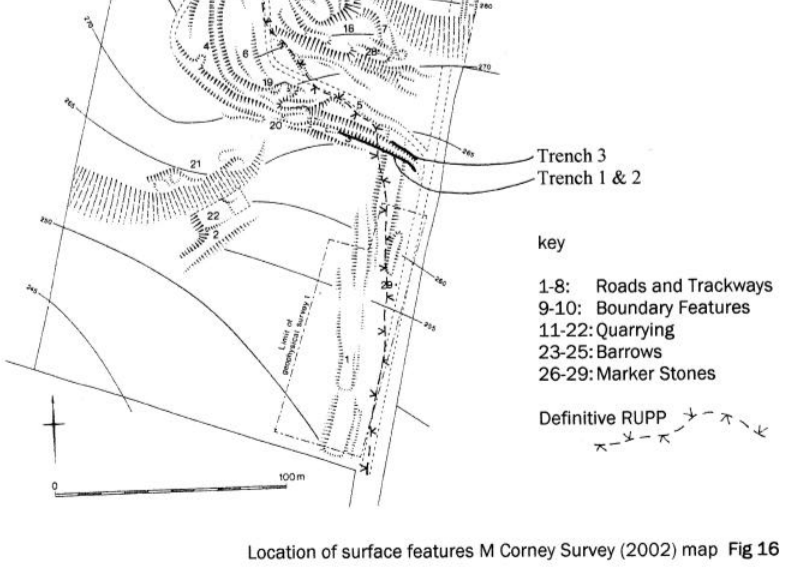 It was hoped that these trenches might locate some remains of a road surface, its
foundations, or side ditches, but in the event no such features were recognised. The only
archaeological feature encountered was part of a pit towards the east end of Trench 1, cut
over one metre into the underlying stony sands and subsoil, and containing a single flint
point or arrowhead of Neolithic type. Clearance along the bottom of the holloway in this
sector exposed a roughly cobbled surface that extended westwards as far as the quarry
(no. 20 on Fig. 16). The excavations along its side revealed that this had been deliberately
laid but no dating evidence was recovered.

Failure to locate remains of the Fosse Way here may be accounted for by a
misidentification of the agger earthwork, a different line for the original road, or major
disturbance and destruction of any such remains in this area. The latter is perhaps the most
likely explanation, given the presence of several deeply cut holloways on this steep slope,
combined with the processes of erosion and perhaps deliberate robbing of former road makeup.
The topography of Beacon Hill here seems to rule out a straight course for the Fosse Way through
the wood northwards from this point, and a small divergence to the
west would be logical to ease the ascent of a very steep scarp. This factor also accounts for
the development of the holloways over the centuries between the deterioration and
probable obliteration of the Roman road, and the likely abandonment of this route as a
regular highway during the 18th century. Whether any further information on the character
of the Fosse Way here can be gained, or the original course of the road ever be traced,
must await future research or discoveries.