Tensions between Britain and France were raised following the Orsini affair and the fear of invasion led to creation of the Volunteer Rifle Corps in May 1859. On the 11th April 1860, the 15th Company of the Somerset Rifle Volunteer Corps was raised  in Shepton Mallet.

The first evidence we have for the rifle range is in the Shepton Mallet Journal for the 4th July 1862, it contains an account of shooting competition taking place at ‘the butts’. It does not mention the Beacon specifically, but as the distances involved include 700 yds, it seems likely that this was at the Beacon.

The word ‘Butt’ is an interesting term derived from the Anglo French word ’bouter’ meaning to expel. In 1252 the ‘Assize of Arms’ ensured that all Englishmen between the age of 15 to 60 years old should equip themselves with a bow and arrows. This was followed in 1363 by a law which made the practice of archery on Sundays and holidays obligatory. This led to the establishment of special training spaces called ‘Butts’, these were typically located on the margins of villages or towns on common land. We do not know if the land around the Beacon was in use for archery from these times, but it is certainly worth further investigation.

On the 30th October 1868 we get the second mention of the rifle range in the Shepton Mallet Journal. This article recounts an unfortunate accident in which a Mr James Heal, Blacksmith of Wells is killed during a Battalion shooting competition.

In 1886 the layout of the rifle range, with the associated danger flags is shown on the 1:2500 scale Ordnance  Survey map of the area. 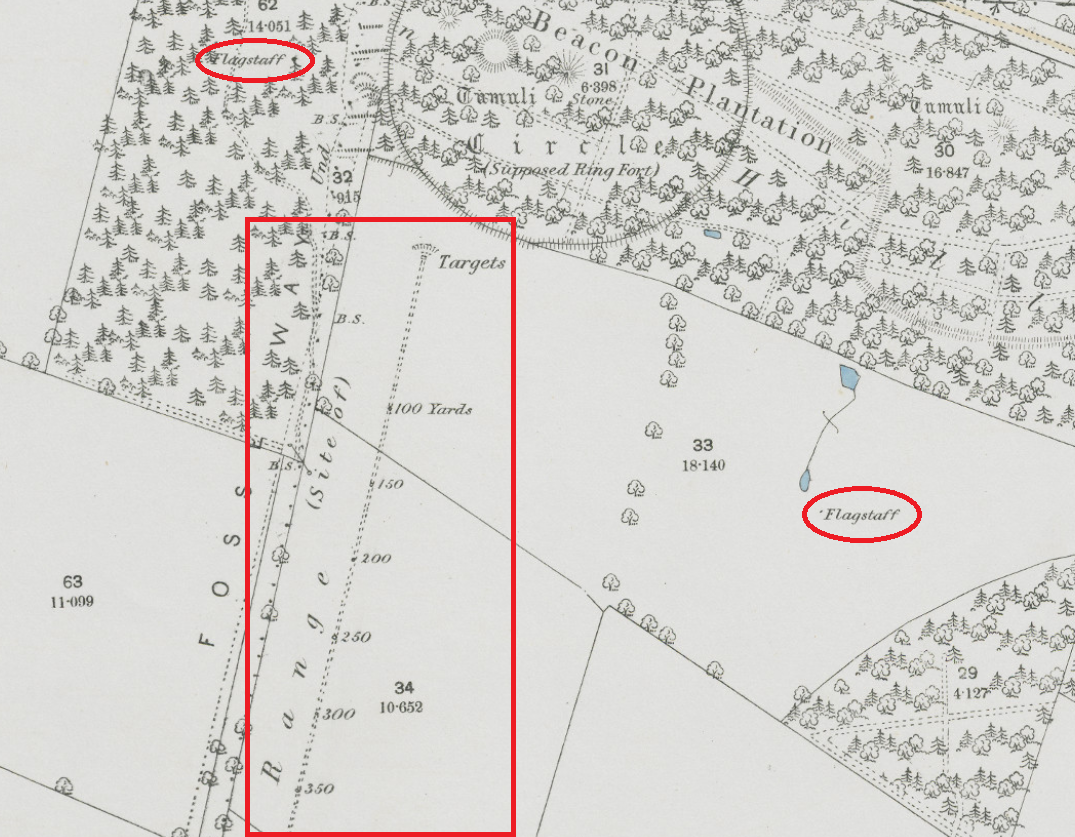 The base of the flagstaff, shown on the left of the map above still exists in the woods.

A few years later in August 1900, again in the Shepton Mallet journal, we discover that the range is about to be upgraded.

During the Second World War, Mr R. E. Woods attended the range and sixty years later he provided an account of how the range operated:

“..When we attended the range there was a large pit in the butts to safely accommodate the party who raised and lowered the targets and range safety equipment such as the red danger flags. I can not remember any storage facility in the pit in the butts under the targets. As it was only a small range, there was not the usual vertical crashes to hold targets where one target was displayed for firing and the second target was underneath it being pasted up. The targets were swivelled on a pivot and swung 180 degrees, the upper target being used for firing and the second was below it for pasting up, then swung 180 degrees for use. This was a crude device but it suited a small range as it was vandal proof, there not being a full time Range Warden. I can never remember seeing any formal notices to inform the public about safety aspects of the range or the significance of the red danger flags, flown on the Old Frome road and the Fosseway when the range was in use…”

The range seems to have fallen out of use in the late 1940’s, Mr R. E. Woods again provides us with the following information:

“…After WW2, the Home Guard were disbanded and the Territorial Army was put in suspended animation until reformed in about 1947, so there was not a requirement for a Small Arms Range at the Beacon. I understand the Beacon range was repaired as a voluntary activity led by Flt Lt Horler, from Croscombe, CO of the Wells ATC Squadron in a private capacity for use by a Rifle Club. Possibly a post WW2 Home Guard Rifle Club for a period…”

An aerial photograph from 1966 is unclear, but seems to show the butts in state of deterioration: