Trench 1 was excavated in October 2005 as the first stage in a programme of further archaeological research within Beacon Wood. As a preliminary it was resolved that we examine one area suspected as a site of ancient stone quarrying, by means of a hand-excavated trench. The site chosen lies immediately below the south-facing scarp of Beacon Hill in the hollow to the east of the barrows on its highest point, approximately 125m east of the marker stone, at NGR ST 63904585. Over a five day period between 19d’ -23rd October a total of 12 volunteers were involved in both excavation, recording and backfilling of a test trench. Our team included members of the Beacon Hill Society and the Charterhouse Environs Research Trust (CHERT), as well as other local volunteers, and I am grateful to all, and especially our Secretary- Peter Banks, for their hard work and support in all weathers!

The excavation trench – an L-shaped cut 10m x 2m north-south and 9m x 2m east-west – was laid out to examine suspected quarrying up against the steepest slope of the hillside, and an area of more level ground below it (Fig. 1). A surface layer of leaf-litter and a thin, organic-rich sandy topsoil was removed throughout, along with some tree stumps and roots, live trees being avoided. Along most of the eastern trench a weathered surface of bedrock was reached within 300mm of the surface, sloping gently downhill to the east and broadly in conformity with the modern ground level (Fig. 2). It was sealed by a mixed sand and stone rubble deposit with many tree roots, not completely removed. The bedrock was found to be a sequence of relatively fine-grained pink-brown sand and silt-stone beds inclined fairly steeply from (approximately) south to north. There was no clear evidence of human activity above the bedrock nor of modification to its surface.

A much deeper complex of deposits was found and sectioned in the northern arm of the trench (Fig. 3). Here, the bedrock had been cut back along the base of the scarp slope as a shallow quarry to a depth of lm or more and over 4.5m wide. The rock itself exhibited a sequence of strata comprising two beds of coarse red-brown, poorly sorted conglomerate separated by a thin, finer sandstone bed with sparse conglomerate inclusions. The lower conglomerate bed overlies the finer sand and siltstone outcrop exposed in the eastern arm of the trench. A section c. 0.75m wide was cut to the base of this quarry, which had a concave profile in the lower conglomerate and also appeared to be sloping down towards the east. (Fig. 4)

The quarry had been backfilled by a sequence of deposits (Section 1) beginning with a tumble of large stone blocks, sand and gravel spread down its south face (layer 1005). This appeared to link up with similar material that spread back over the un-quarried bedrock at the south end of the trench – a dump of stone blocks and rubble with some air spaces immediately below the topsoil (layer 1002) (Fig. 5). The primary quarry fill (layer 1005) merged northwards into a much finer deposit of weathered gravel and small stones (layer 1006). Sealing both was a very mixed stony layer of sandy gravel, small stone rubble and a few very large stone blocks, 300-400mm thick (layer 1004). Two roughly pecked and shaped oval sandstone cobbles from this layer, c. 100x 80mm, appear to be hammerstones. The latest deposit within the quarry was a much finer layer of gravel and pebbles with few larger stones, up to 300mm thick and continuing upslope above the northern quarry edge (layer 1001). A few small pieces of coal were found in this layer.

A preliminary interpretation suggests the following sequence of events. A shallow linear quarry, aligned approximately east-west, was excavated along the foot of the natural scarp slope to expose two beds of coarse conglomerate separated by a thin finer sandstone. Only the two lower strata were apparently quarried, though to no great depth, a lower outcrop of softer and finer grained rock to the south remaining upstanding as an un-quarried shelf. Some upcast from this activity was spread over this shelf as waste debris (layer 1002), the remainder tumbling back into the disused cut. Finer debris (layer 1006) also washed in down the steeper scarp slope to the north. The more mixed deposit (layer 1004), with the hammerstones, suggests debris from a later phase of quarrying nearby, possibly upslope. The final event was further weathering of the slope above, which all but obliterated the quarry hollow with finer material (layer 1001).

The hammerstones were the only artefacts found, probably to roughly shape stone selected for removal rather than to quarry bedrock, and no direct dating evidence for the quarrying was recovered. Likewise, no information relating to the finished products of quarrying or working areas was found, although what appear to be earthwork platforms nearby to the east might contain such evidence. Recovery of Beacon Hill stone on Roman settlement sites elsewhere in Somerset suggests that it was used for mill and quern stones, sharpening stones, and as road metalling on the Fosse Way. On this basis the quarry could have been accessing the coarser conglomerate for road stone, while the thin intermediate band of sandstone appears to be more suitable for querns and millstones.

This preliminary phase of investigation has provided a useful glimpse of the geological sequence in the wood, as well as some of the quarry operations. The conglomerate outcrop, and probably other hard beds of finer sandstone, are evidently reflected by the steepest scarp slopes. Underlying softer outcrops probably correspond with more level ground lower down. The conglomerate was the main focus for quarrying, working along exposures to remove the most easily obtained stone rather than by mining or very deep excavation. Some of the linear quarries that resemble mining rakes in the western part of the wood probably have a similar origin.

Despite the absence of dating evidence or of the products of quarrying, there remain other areas where further investigation could be more fruitful. Examination of these and the course of the Fosse Way through Beacon Wood are still on the agenda, and will feature in a second phase of trial excavations planned for the New Year. Sites in the western half of the wood will be the focus, and we anticipate that mechanical excavation- and backfilling! – will greatly facilitate this. Watch this space for further details! 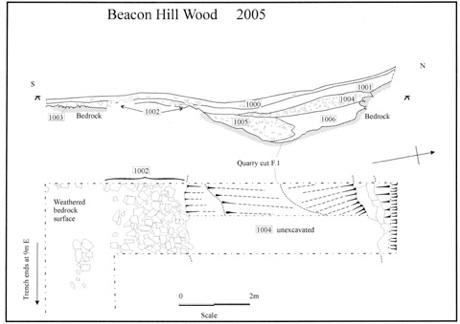